Plans For New Willenhall Station Are Full Steam Ahead 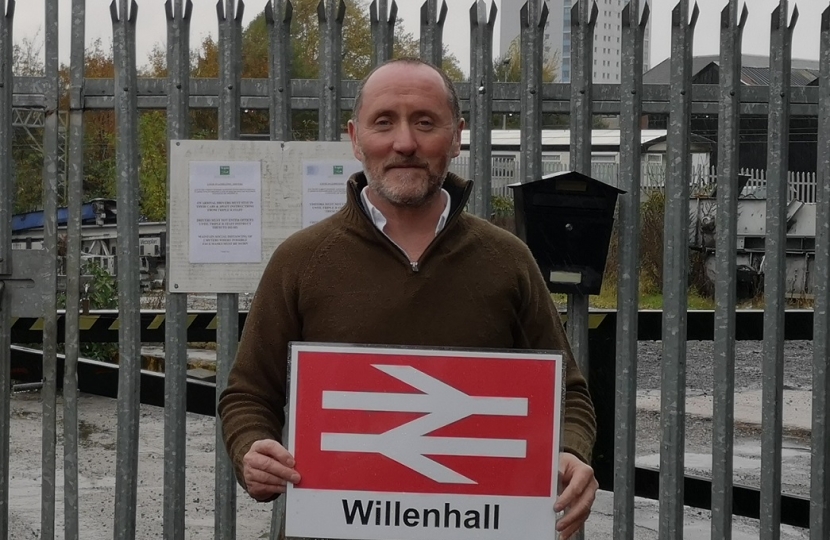 It’s now ‘full steam ahead’ for plans to reopen a railway station in Willenhall for the first time in more than 50 years.

After years of campaigning by Mr Street and Walsall North MP Eddie Hughes, Walsall Council’s planning committee has given the green light to an application by the West Midlands Combined Authority (WMCA) for the new station, along with another at Darlaston.

Willenhall’s new station will replace old industrial buildings in Rose Hill and Bilston Street, which will be demolished to make way for two platforms, a footbridge and parking for 33 cars, as well as better pedestrian crossing facilities in Bilston Street.

Restoring passenger services to the Walsall to Wolverhampton railway line is a critical part of our transport strategy for the West Midlands, and we have taken another step towards achieving that vision by securing planning approval for these new stations at Darlaston and Willenhall.

We are now looking to get work underway as soon as possible, and our search for a construction contractor has already begun.

People have been waiting a long time to see services restored, and these better connections will be a catalyst for regeneration in this part of the Black Country.

As well as unlocking land for industrial and housing development and improving transport links across the region, the construction of the two stations will provide work for local people at this difficult time, helping to protect and create new jobs in the West Midlands.

Willenhall’s original station, which was called Willenhall Market Place, first opened in 1872 but closed to passengers in 1931. It shut completely in 1965, under the nation-wide ‘Beeching’ cuts. The line has only been used by through trains ever since.

Eddie Hughes MP said: “I’m delighted that the planning application has been given the green light, and I’m particularly excited about a station reopening in Willenhall.

“I think both stations will have an incredibly positive impact on the area, as they will give local people access to opportunities around a better-connected West Midlands, enabling them to commute more easily.

“Andy Street has supported this campaign right from the start and I’m looking forward to the station opening, hopefully, in 2021. It will make a big difference to local people.”

Under current plans, two new hourly services would call at the stations once they have been opened

One will be a direct Walsall to Wolverhampton route while the other will be a Wolverhampton to Birmingham service, calling at the existing Tame Bridge Parkway station as well as Darlaston and Willenhall.