Our pioneering bus partnership will get the West Midlands economy moving 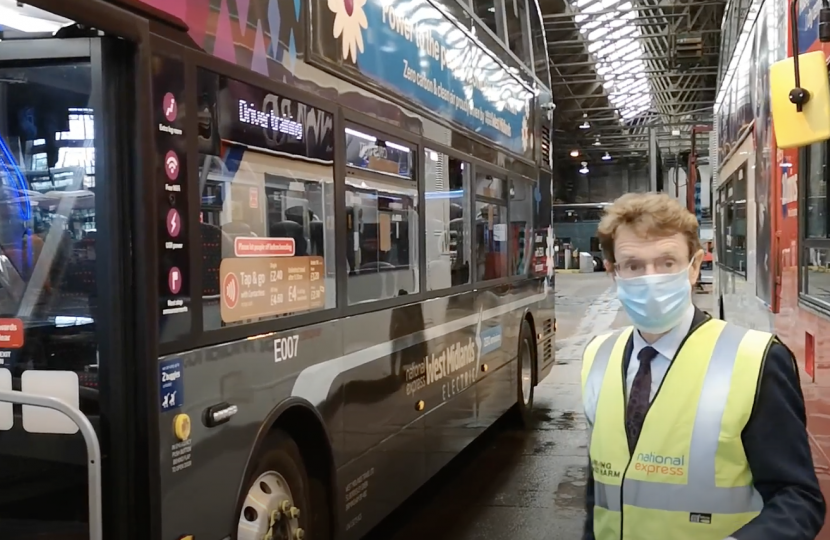 As we plot our route out of the pandemic, transport will be vital if we are to get our local economies moving again. While trams, trains and HS2 make headlines as construction sites spring up along new routes, the bus network remains the workhorse of public transport in the UK.

Here in the West Midlands, before Covid-19 struck bus was by far the most used form of transport, with 267 million journeys a year compared to 50 million for rail and about seven million on the region’s Metro tram system.

In fact, we were one of the few places in the country where bus use was rising. In the 12 months up to December last year, the number of people catching the bus in the West Midlands rocketed by almost eight million.

As we encourage people to fully return to public transport, I have huge confidence in our pioneering approach to bus provision. In this column, I want to tell you what makes our way of doing things such a success.

Crucially, our approach does not involve franchises, a model which is too readily seen as an expensive panacea. It is based instead on a genuine partnership between the transport authority, providers, and passengers – and it works.

The Bus Alliance is a partnership between Transport for West Midlands (TfWM), which is part of the West Midlands Combined Authority, bus operating companies, the Safer Travel team, and passenger group Transport Focus. The alliance model brings the best of public and private sectors together, resulting in not only huge private sector investment but collaborative, joined-up thinking that has made the network itself work better for local people.

First, I want to pay tribute to the vision and commitment of our main provider, Birmingham-based FTSE company National Express, who have made an immense investment in our region.

This month they announced a fourth consecutive annual fare freeze – a huge contribution to millions of families here at such a difficult time. Helping more people to choose public transport is a key part of our transport plan for the coming years, but as communities face the economic impact of coronavirus, this latest fare freeze was widely welcomed.

At a regional level, we are also funding fare reductions for targeted groups, such as half-price travel to all 16-18-year-olds, benefitting up to 105,000 apprentices, students, trainees, and those in work.

A TfWM scheme, called Workwise, is available to jobseekers and apprentices for up to three months when they start a new job. Schemes such as these are going to be vital as we create opportunities for younger people, who have been so badly impacted by the pandemic.

However, passenger growth has not just been on the back of lower fares. Convenient payment by phone, the Swift travel card and contactless cards live timetable apps, and capping fares are also making bus travel more attractive here. What is even more impressive is this success has not been achieved through cutting corners on the fleet­. If we want people to embrace public transport, we must ensure vehicles and facilities are modern, safe, and pleasant.

As a Brummie, my memories of local bus travel growing up in the West Midlands are not always pleasant – with often cold, dirty and uncomfortable buses, with cigarette smoke on the inside and engulfed by exhaust fumes on the outside. Things have changed.

For proof of this, look no further than the roll-out of National Express’s Platinum bus fleet across the region, which is helping transform the experience of users. These top specification double-decker buses boast comfier seats, USB points for passengers to charge their phone, crystal-clear CCTV for safety, bright LED interior lighting, improved soundproofing and audio ‘next stop’ announcements. They also have hybrid engines that emit extremely low levels of the pollutant nitrogen oxide.

This commitment to address the environmental footprint of our bus fleet is another part of the approach which is driving passenger growth. National Express have made a promise to never buy another diesel bus. Across Birmingham, Coventry, and Solihull electric buses are already in service.

This spring, 20 new hydrogen buses – which consume four times less fuel compared to diesel buses and cover 300 miles on a single tank – will be introduced in Birmingham. They emit water vapour, meaning no carbon dioxide or other harmful gases are being pumped into the air.

So, just like our automotive sector, the West Midland’s bus industry is at the cutting edge of technology – but we are ambitious to go further and faster. We are bidding to host one of the country’s first Electric Bus Towns, which would deliver a further step-change in our fleet.

What’s more, the work of the Bus Alliance has ensured that, amid all of this innovation and ambition, we have never lost sight of how bus transport has critical social value for some passenger groups. Together, we have protected access services such as Ring and Ride, with TfWM stepping in to temporarily run the service when the previous operator went bust, and National Express then taking over.

Fittingly, during the pandemic, our Ring and Ride vehicles were deployed to provide free and safe shuttle services for frontline NHS staff, between stations and their workplaces. This simple idea showed the Bus Alliance at its very best.

Alongside new vehicles and cheaper fares, we are investing heavily in existing bus stations like Walsall and linking up buses to the new railway stations being built like in Coventry and Wolverhampton. Top of my list for the next major improvement is Dudley, where I want to see the town’s bus station completely redeveloped into a multi-million-pound interchange.

Elsewhere, we are investing in bus prioritisation and improvements, including the rollout of new “Sprint” services as part of the public transport plan for the Commonwealth Games, while we are also developing a new cross-city rapid bus route.

Finally, the West Midlands is going to lead the nation with tough new byelaws to tackle anti-social behaviour on buses. These new rules will mean people who spoil the journey of others through smoking, vaping, drunk and disorderly behaviour, playing loud music, vandalism, or threatening and offensive activities face being thrown off the bus and then fined.

These rules have existed on trams and trains for some time, but we will be the first to extend them to buses. I believe people have the right to a safe, pleasant journey and this will help tackle the small number of people who seem to disagree.

Funding has been vital to all these improvements, which over the last nine months have been challenged by the falling patronage brought by the pandemic. The Government’s unprecedented backing has allowed us to maintain the service throughout. Now we await next year’s National Bus Strategy, which will be essential to continuing our progress.

For a long time, buses have been the workhorse of public transport – the poor relation in comparison to flagship investments in tram and rail. Through our Bus Alliance, the West Midlands have chosen a new route, without the need for franchising. It has delivered tremendous investment and innovation, is playing a key role in the environmental challenge and is supporting people starting out with an apprenticeship or new job.

As we plan to safely return the UK’s transport network to full capacity, we have shown that a collaborative approach can work.