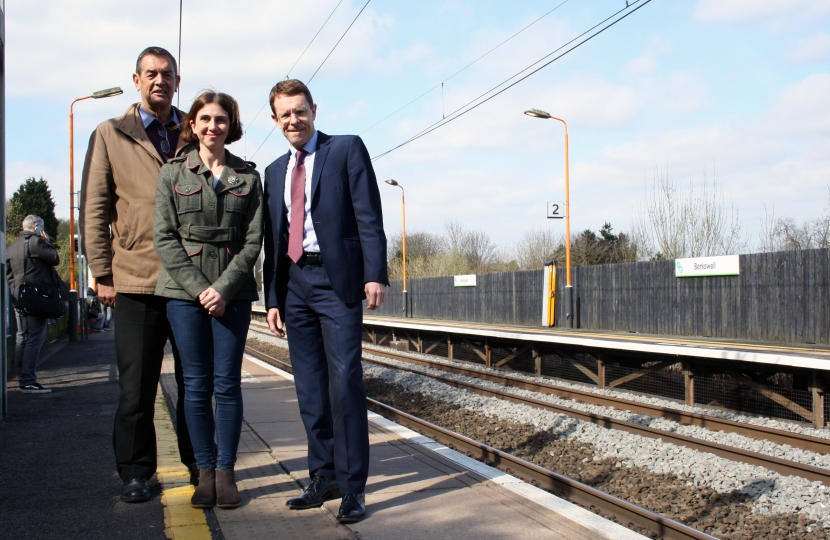 West Midlands Mayor Andy Street says he will keep pressing for better services for Balsall Common commuters who use Berkswell railway station – including stamping out the ‘appalling’ practice of skip-stopping, which has regularly seen stops at the station cancelled at short notice.

Mr Street, who heads up the West Midlands Combined Authority, said that there were indications of improvements in services, but stressed that skip-stopping remains an ’unacceptable practice that rightly infuriated passengers’.

“The service on the Coventry corridor to Berkswell Station had been woeful since the time table introduction last year, and I was involved in constant negotiations throughout the autumn, but by December I knew it was time for me to step in, because the performance levels on the line had simply collapsed.

“Since then we have seen some critical steps taken to help Balsall Common residents who use Berkswell station to commute.

“One of the things I know that angers passengers is skip-stopping, and it’s particularly infuriating for Berkswell station and Balsall Common commuters. It happens when trains are running late and the operator decides, at short notice, to announce they will skip certain stops on the line. It leaves people stranded on platforms or unable to get off at their stop. It’s an unacceptable practice that rightly infuriated passengers.”

Rail operators regularly use skip-stopping to reduce travel time and increase capacity but after Mr Street’s intervention West Midlands Trains have said they aim to employ it only as a ‘last resort’.

And after Mr Street highlighted poor service, the operator has also introduced a number of price discounts as they attempt to improve services.

“They have agreed not to go ahead with the planned season ticket increase,” Mr Street said, “So, while there was 2.7% increase across the country, our season ticket holders were given a 3% discount.

“As far as we know that’s the first time that an area of the country has agreed to season tickets prices effectively going down, which I think is a real acknowledgement that services have simply not been good enough.

“Since then, we have also had confirmation that there will be discounts of 10% on day tickets for all the school holiday periods this year, starting in February half term.

“So, if you want to go for a day out in Coventry, Birmingham or even London you will get a discount on your tickets.

“All of this indicates real acknowledgment of the issues that have been impacting on people who use stations like Berkswell, but it is not enough – I will keep pressing for further improvements.”