Mayor Andy Street: “We Can Be A World Leader In The New Clean Electric Vehicle And Battery Industries” | The Conservative Party Skip to main content

Mayor Andy Street: “We Can Be A World Leader In The New Clean Electric Vehicle And Battery Industries” 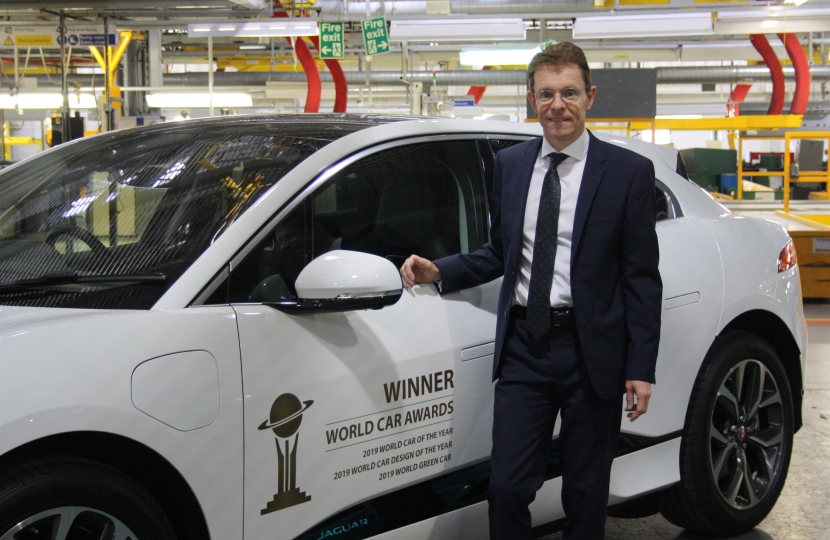 Andy Street has today set out his ambitious plan to make the car industry in the West Midlands a world leader in new clean electric vehicle and battery technologies, bringing thousands of new green jobs to the West Midlands.

As part of his plans Andy, who serves as the current Mayor of the West Midlands, has committed to do all he can to bring a battery Gigafactory to the West Midlands, and he revealed that he had been in active discussions with battery manufacturers as recently as this week.

He also raised the prospect of van and bus manufacturing returning to the region, but now with electric drivetrain and battery technology.

Andy is launching his plan on a visit today to Westfield Autonomous Vehicles on the Pensnett Trading Estate in Kingswinford.

Andy Street said, “This is a brilliant West Midlands company which is selling millions of pounds worth of driverless pods to South Korea and around the world. This creative genius will be what will set this region up for a prosperous future.”

Andy’s plan for the automotive industry includes detailed proposals of how to drive forward the transition to clean electric vehicles, and is informed by the work of academics and industry experts. Andy plans to:

His announcement comes in the same week that Jaguar Land Rover unveiled ‘Project Vector’, their prototype for new autonomous electric vehicle, which will be piloted next year on the streets of Coventry with the support of Transport for West Midlands.

The Plan also summarises some of the progress that has been made for the car industry in the three years since Andy Street became Mayor of the West Midlands. Andy has:

Andy Street, the former Managing Director of leading retailer John Lewis said: “If I am re-elected as Mayor in May I will continue to champion the West Midlands car industry as a priority.

“The climate emergency makes it more urgent that we work together to support the car industry in the region in its transition to green technologies. We have a great heritage of car-making in the West Midlands and we can be a world leader in the new clean electric vehicle and battery industries.

“There is the potential to bring thousands of well-paid new jobs into the region and that’s why we need a business-minded Mayor who understands the car industry and has been working hard to help the industry in the West Midlands stay one step ahead of our global competitors.