Grant will help get Aldridge people back in the saddle, says West Midlands Mayor Andy Street 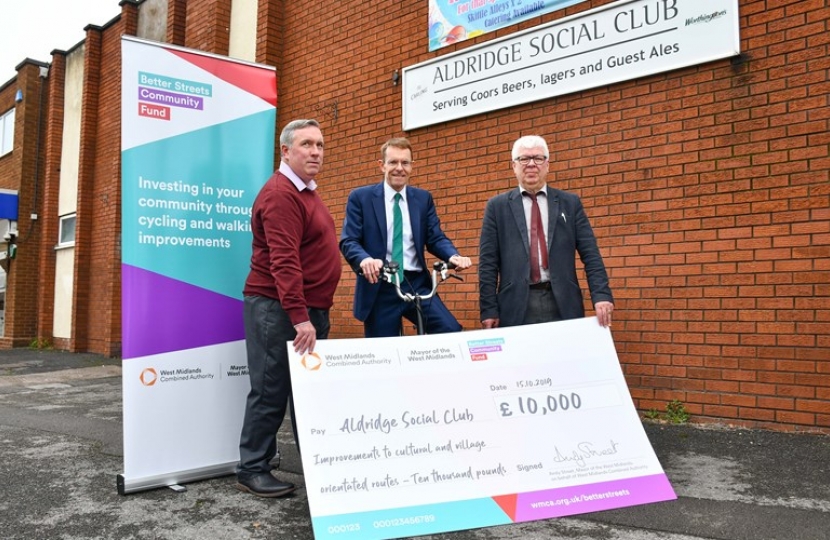 West Midlands Mayor Andy Street says he hopes a grant of £10,000 will help encourage Aldridge people to take up pedal power and get on their bikes.

Mr Street, who heads up the West Midlands Combined Authority (WMCA) visited Aldridge Social Club recently to hand over the £10,000 cheque following its successful bid for a cycle storage facility.

“Cycling and walking are a key part of our plans to reduce traffic congestion and improve our environment,” he said, “so we want to persuade more people to get out of their cars and find a healthier way of getting around.

“That’s why, as a region, we have raised funding to £10 per head over the next two years for cycling projects,” he said. “Aldridge is one the areas that is benefitting from that cash.”

Grants of between £10,000 and £180,000 from the Better Streets Community Fund (BSCF) will pay for a range of projects across the West Midlands including better paths, improved street lighting, secure bike storage and safe crossings.

Schools, community organisations and residents’ groups came up with ideas to make their streets safer and make it easier to cycle and walk. More than 30 of the applications for funding have been successful – including the Aldridge bid.

“The Aldridge Social Club is one of many community groups that came forward with good ideas,” Mr Street said. “The money will pay for new cycle parking outside the club and signs on Aldridge High Street that will hopefully encourage more groups to cycle around town.

“We are delighted to be able to support them through the Better Streets Community Fund.”

Elsewhere in the borough, the Better Streets Community Fund will help make Walsall Rugby Club a cycling hub for the local community - including a children’s balance bike track - while across the region the cash will pay for new cycling routes, crossings and traffic calming measures.

“I can’t wait to see the plans come together for cycle hubs, bike paths, better lighting and crossings to improve safety and bike storage to ultimately take away any barriers to people walking and cycling in the West Midlands.

“Thanks to all the community groups who’ve got involved to take advantage of the funding and I look forward to visiting some of the projects as they come together.”