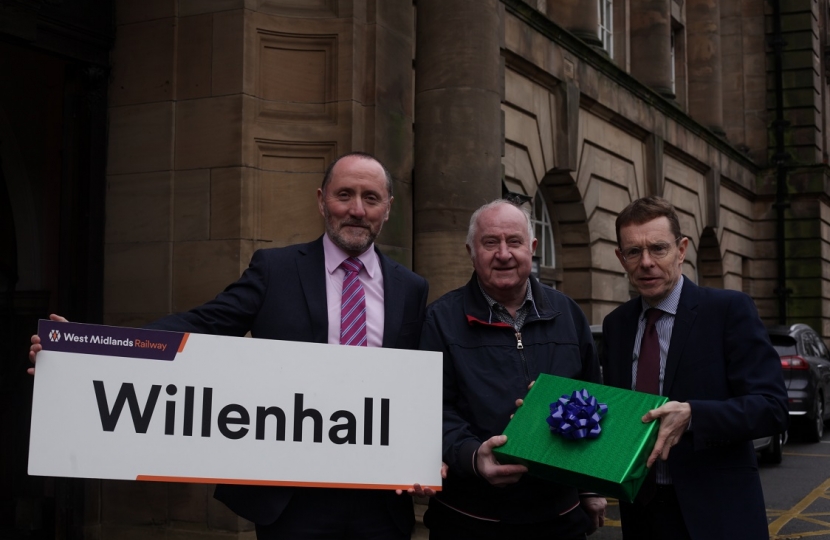 As he presented the applications to Cllr Mike Bird, leader of Walsall Council, Mr Street said it was now ‘full steam ahead’ for the new stations in Willenhall and Darlaston following months of campaigning with Walsall North MP Eddie Hughes.

“This is a huge step forward for our long-held ambition to reopen railway stations in Darlaston and Willenhall,” Mr Street said, “the plans are now in the hands of the council and we want to get going and build them as soon as possible.

“This has been a long journey. It began with an idea, which was then backed up by research and consultation, leading to the creation of designs and the release of £10million funding from the Government. Now it’s full steam ahead to get these stations up and running.”

Mr Hughes said: “Thanks to the money provided by the Government, along with other cash from the HS2 Connectivity Fund, these applications aim to build high-quality stations at both Darlaston and Willenhall, with all the amenities they need.

“I think the stations will have an incredibly positive impact on the area, as they will give local people access to opportunities around a better-connected West Midlands, enabling them to commute more easily.

Mr Street said that connecting Willenhall and Darlaston by rail to Wolverhampton and Walsall would also bring an economic boost.

“It means businesses will be able to relocate along the line, bringing even more opportunities for local people. When we have the stations in place, along with car parks and transport links, I think they will become hubs for growth.

“What’s more, by getting people out of their cars and onto good quality public transport we are tackling both congestion and the climate change emergency at the same time,” he added.

Darlaston’s first railway station opened in 1837, while Willenhall’s original station, which was called Willenhall Market Place, first opened in 1872 but closed to passengers in 1931. Both stations shut in 1965, under the nation-wide ‘Beeching’ cuts.  Passenger services returned to Darlaston in 1998 but stopped again a decade later due to lack of use.

Walsall North MP Eddie Hughes added: “I’m delighted that the planning applications have now been submitted, and I’m particularly excited about a station reopening in Willenhall.

“Andy Street has supported this campaign right from the start and I’m looking forward to the station opening, hopefully, in 2021. It will make a big difference to local people.”

The Willenhall station will be sited next to the Bilston Street railway bridge in the town centre. The Darlaston station will be built on derelict land next to the Kendricks Road bridge. Seven acres of land in Cemetery Road, Darlaston have now been purchased – completing another piece of the land jigsaw required for the new station.

Both new stations will have two platforms, big enough to accommodate six-carriage trains, as well a pedestrian footbridge, stairs, lifts, ticket machines and drop-off areas. There will be a 300-space car park at Darlaston and 150 spaces at Willenhall.

Mr Street added: “The reopening of railway stations, to reconnect communities and provide people with access to new opportunities, has been an exciting aspect of our transport renaissance in the West Midlands.

“Now it is happening. In places like Moseley and Kings Heath in the South of Birmingham and here in Willenhall and Darlaston in the Black Country we are seeing real progress. We are on track to seeing local stations re-opened that communities will be proud of.”

Walsall councillors will consider the planning applications in the coming weeks, and it is hoped to start work next year with a view to reopening the line to passengers by the end of 2021. The aim is to start with an hourly service between Walsall and Wolverhampton and another hourly service between Birmingham and Wolverhampton calling at Tame Bridge, Darlaston and Willenhall.