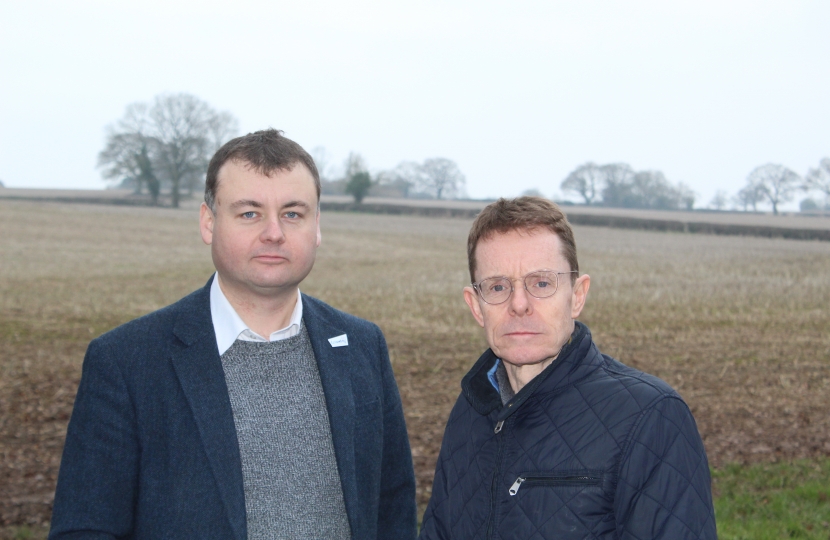 Myself and Coventry Conservative Councillors are backing a new website and petition which aims to block thousands of homes being built on precious Coventry greenbelt – by making council chiefs review the city’s Local Plan.

Coventry Conservative leader Councillor Gary Ridley and I are urging residents to visit www.protectcoventrysgreenspaces.co.uk and sign the petition, which calls for a comprehensive review of the Local Plan, which was adopted in 2018, which they say puts the green belt at risk because it is ‘fundamentally flawed’.

Councillor Ridley said: “This Local Plan will wreak irreversible damage to the City and its environment if there is not a change in direction.”

“We are now seeing a wave of planning applications for green field sites at various stages through the planning process – with Kings Hill having been granted permission and others coming forward soon like Eastern Green where the Council has just given planning permission for the access junction. The attack on green field sites is coming thick and fast, left exposed by a Local Plan based on fundamentally flawed assumptions.”

“By not having a sequential approach that requires the brownfield sites to be developed first the current Local Plan leaves green field sites first in the firing line.”

“We want people to sign our petition to get the Local Plan comprehensively reviewed before it’s too late. Coventry should have a policy of building new homes on Brownfield sites first, which has been shown to work elsewhere in the West Midlands, but this plan is giving a green light to developers to target the countryside.”

The Local Plan is a legal document that sets out the city’s plan for the future development of the local area, guiding decisions on whether or not planning applications can be granted and deciding how many homes are built and where.

However, I have warned that Coventry’s Plan was based on predictions that the City’s population would grow massively by 2031, which are now unlikely to be accurate.

“The Local Plan was drawn up using a prediction from the Office of National Statistics (ONS) which projected a population increase in Coventry of 31% by 2031, but in fact the rate has slowed massively.

“We have recently received a letter from the ONS which confirms the annual growth rate has in fact slowed to 1.3% - the lowest in ten years. We are deeply concerned that this is distorting local planning policy – and leading to the unnecessary targeting of the green belt for development.

“We have challenged this for years, with no action being taken, while more and more planning applications are put in for green open spaces, angering local residents.

“At the moment the City Council is complicit in allowing these green field developments because it is failing to put in place the protections it should and in the case of Kings Hill is actually selling green field land for development.”

“www.protectcoventrysgreenspaces.co.uk provides a place for local campaigners fighting to protect places like Coundon Wedge, Eastern Green, Keresley and Westwood Heath to unite and call for a review of the Local Plan.”

Cllr Ridley said that the flaws in the Local Plan had been compounded by Council’s approach, which meant that of the 25,000 homes to be built within the City, 8,000 are on former Green Belt sites. He added that of the 17,000 outside the City many are on Green Belt sites close to Coventry – including Kings Hill, which borders the city.

Critics of the Local Plan also say that it should be reviewed because of the Climate Emergency, which significantly increases the importance of the Green Belt, as well as the economic impact of Brexit and COVID-19. It also fails to push for development on former industrial sites before open spaces.

The West Midlands is pioneering ways to reclaim old brownfield sites for housing development, which not only protects the green belt but also ensures that homes are built in central locations that are already served by public transport and which can reinvigorate our town and city centres.

This sensible approach – to always try to build on brownfield sites first – is clearly working in other places in the West Midlands, and I think the people of Coventry would want to see it adopted, to help protect their open spaces too. It’s common sense.

We are providing regional funding to enable more brownfield sites to be regenerated – for example at the old gasworks at Abbotts Lane.

Visit www.protectcoventrysgreenspaces.co.uk to find out more about the petition.