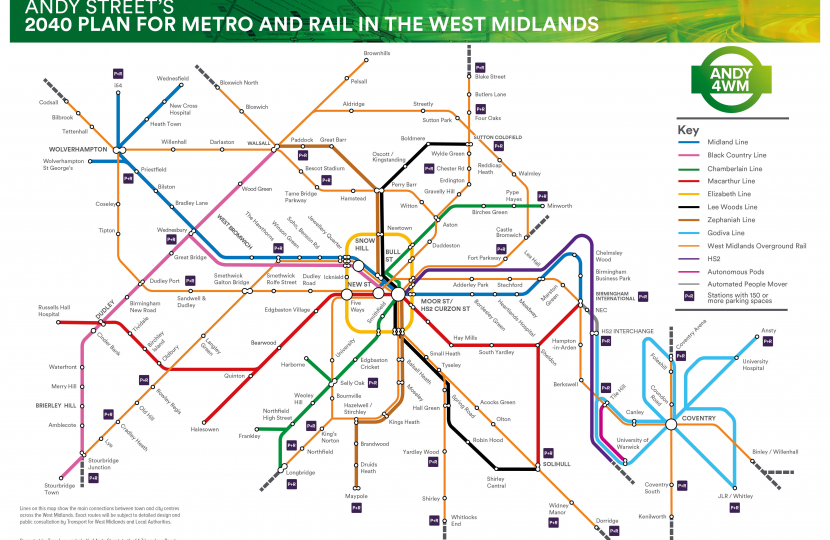 Andy Street has today unveiled a ‘Tube-style map of the West Midlands’, outlining his twenty-year ambition for Metro and rail lines in the region.

In Coventry, new technology such as ‘very light rail’ trams and driverless autonomous pods would be used to connect key sites such as the University of Warwick, Jaguar Land Rover, Ansty and the City Centre.

Existing rail plans to re-open the Camp Hill line (Moseley, Kings Heath and Hazelwell / Stirchley) and the Walsall to Wolverhampton line (Darlaston and Willenhall) have already been designed in detail and are at planning stage.

New plans announced today would make a total of 21 new stations in the West Midlands by 2040, including re-opening the Sutton Park Line starting with Aldridge station, re-opening Pelsall and Brownhills stations, and building a new station at Tettenhall. In Coventry, there are plans for four new stations at Coundon Road, Foleshill, Coventry South and Binley / Willenhall, and there are plans for new Birmingham stations in Balsall Heath and at Dudley Road.

The total cost of these plans would be around £15 billion, or around £750 million per year for the next twenty years. These costs would be met by additional funding from central Government, contributions from housing and commercial developers and borrowing against the future income from ticket sales on the Metro.

Andy Street, the former Managing Director of leading retailer John Lewis said: “For too long we have been left behind London and Manchester, and other cities around the world. We are a world-class city region and we deserve a world-class Metro and rail network.

After another interesting week for the West Midlands, I wanted to take the time to update you on what is going on across the region, as well as reflect on some key announcements from the past week.